In March 2017, the Museum of the Moon was presented in the Great Hall at University of Bristol, UK.

The artwork was exhibited to mark the installation of the University’s new Chancellor, Sir Paul Nurse and to also reflect and celebrate the astronomical research which the University carries out. Over the years there has been a variety of moon related research completed.

From the beginning of human history, the moon has acted as a ‘cultural mirror’ to our beliefs, understanding and ways of seeing. Over the centuries, the moon has been interpreted as a god and as a planet. It has been used as a timekeeper, calendar and to aid nighttime navigation. Throughout history the moon has inspired artists, poets, scientists, writers and musicians the world over. Different cultures around the world have their own historical, cultural, scientific and religious relationships to the moon. With news of the artwork capturing people’s imaginations, a large queue of people formed outside the Wills Building before the show opened. In just 2 days, over 20,000 people came to bathe in the moonlight and listen to the ethereal music. Couples were seen holding hands and there was even an impromptu visit from some enthusiasts dressed as spacemen. Thinking the moon was real, one child said “will they put the moon back, afterwards?”.

‘@lukejerram’s moon is masterful: beautiful, imposing, simple and extraordinary. And such a perfect location.’

‘When your daughter takes you to the moon on Mothers Day. Stunning.’

‘A wonderfully surreal and mesmerising work of art in #Bristol.’

Bristol and the Moon’s influence

The tidal range of the rivers in the Bristol Channel is the second greatest of any in the world (the biggest is the Bay of Fundy, Nova Scotia, Canada). At Avonmouth the tide can rise and fall as much as 14 metres twice a day and even in Bristol the water level can change as much as 12 metres.

The floating harbour in Bristol was built in the early 1800’s to prevent the effects of this extreme tidal variation. 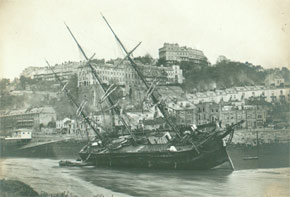 The Man in the Moon

Here in the Northern hemisphere, in the western world we can see a face, or man in the Moon. The images are actually composed of the dark areas of the lunar maria, or “seas” and the lighter highlands of the lunar surface. These vast, flat spots on the moon are called “maria” or “seas” because, for a long time, astronomers believed they were large bodies of water. They are actually large areas formed by lava that covered up old craters and then cooled, becoming smooth, basalt rock.

There are various explanations for how the Man in the Moon came to be. A longstanding European tradition holds that the man was banished to the moon for some crime. Christian lore commonly held that he is the man described in the bible (book of Numbers XV.32-36), caught gathering sticks on the Sabbath and sentenced by God to death by stoning.

In the English Middle Ages and renaissance, the moon was held to be the god of drunkards, and at least three London taverns were named “The Man in the Moone”